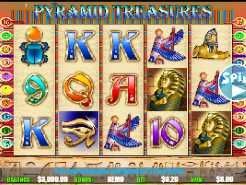 Play Now
Cleopatra was the most famous Queen of Egypt, coming to signify beauty for women all over the world. Her legendary beauty caught the eye of many eminent men, Kings and emperorS,, and the influence she had over Roman Emperor Mark Anthony has gone into legend. Mark Anthony fell in love with the beautiful Cleopatra. Yet, not all that glitters turns to gold, and she had her evil side too. Cleopatra's Pyramid slot brings all the splendour, majesty and magnificence of Ancient Egypt right to your mobile devices, PCs and any location. So why not step inside the mysterious and dangerous Pyramid of destiny where the lovely Cleopatra is waiting there to be right by your side. Her massive pyramid contains untold riches, precious jewels and gold, along with a heavy dose of secrets, mystery, and danger lurking at every corner of the pyramid.

The first imported symbol that catches the eye is the Cleopatra game image. Her immense beauty radiates from all around her, and she has an aura of royalty and allure. You can imagine why half the men in the world fell in love with her beauty. She is the most critical game character symbol and dwarfs all the other icons. The competition is stiff, as some of the other game symbols are impressive as well. The golden Tutankhamun Mummy, the majestic sphinx, the fabulous Bird, the dreaded Eye of Horus, a Sarcophagus, a Scarab, a Totem, and, of course, the famous Pyramids which are all lit up at night. There are also the high card pictures which are duly represented by, the numbers 9, 10, the Jack, the Queen, the King and the Ace card. A pretty extensive and exciting variety of symbols so you won’t get bored seeing the same ones over and over again.

The Power of Cleopatra

The slot graphics are vibrant, smooth and perfect for the game, and the sound effects are never too overbearing or intrusive, on the contrary, they complement Cleopatra's Pyramid slots perfectly. The gameplay incorporates a standard 5-reels set up, along with 20 pay lines for your bets. With such a vast choice of bet options that range from $0.01 a coin rising up to $10 a coin, Cleopatra's Pyramid serves up value and entertainment, spiced with plentiful winning chances. The bonus rounds and unique game features are fantastic and to whet your appetite, the maximum game prize payout is a massive $200,000 bonanza. It can be yours with a single spin of the reels by landing 5 lucrative Cleopatra symbols on your pay lines. That is really impressive by anyone’s standards and can be a life-changing experience.

With Cleopatra's beauty surrounding you while you roam through the secret chambers and passages within the mysterious pyramid, you have a useful magical companion to help guide you through the vast and confusing maze. She will make sure that you can ultimately reach the heart of the pyramid, thereby claiming the highest payout prize that this slot game can offer, and you might even gain immortality as well! To assist you with your mission, the slot provides you with the previously mentioned Wild, represented by Cleopatra herself, and she replaces all other game symbols except the other special images, the Pyramid and the Scarab symbols. The Scarab is the Scatter, and they both have mighty powers. The Wild is also the multiplier icon and will double any of your payout prizes if any combination is formed with the Wild. The Scatter Scarab will gift you 500 times your triggering wager.

The Pyramid game image transports you way back in time within a time capsule right back to ancient Egypt in the mysterious Pyramid of destiny, a tidal b the fantastic Pyramid Bonus game. It will work wonders for you, and Cleopatra's Treasure is what indeed awaits you once you trigger and enter the Bonus round. The bonus game is activated once the Pyramid icons land upon reels 2 or 4, or any other active pay line. Once the bonus round kicks off, the Pyramid will appear magically on your screen containing various levels that also appear upon your screen. Each new level has different precious gemstones all with question marks upon them. Once the starting level is active, you need to choose from one of the ancient gemstones, each revealing what treasure and prizes are hidden within. This continues right up through all the different levels. You can select one gemstone at a time and try to gather up as many prizes and gifts as you possibly can. The options under the stones will provide you with a lucrative cash prize payout, or you may get a Cobra Snake prize. That signals the end of this bonus game. But not to worry, all your wins and awards are cumulative and won’t get lost when the slot has finished, and it can also be carried straight forward to the next game level. The high gemstone in the majestic pyramid image, which also pays out the best. It dwarfs all the other winning payout prizes by far.

Cleopatra's Pyramid slot delivers on almost every level, from the stylish design to the potential for high payouts. There are lovable characters, the bright and vibrant quality of the graphics and the crystal clear sounds add to the positives. The pure and unmistakable thrill of playing a casino slot comes with a realistic atmosphere and is unmissable. The game has it all, and if you don’t believe that, try out Cleopatra's Pyramid for yourself. It is superior to many of its closest competitors and other similar slot games. Cleopatra's Pyramid slots is quite simply put, one of the very best slots out there.
Play Now